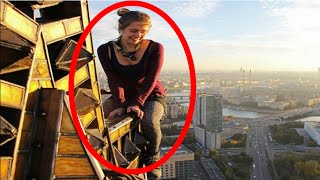 10 People Who Died While Taking Selfies

These Selfies are incredibly powerful and heartbreaking. They were taken moments before death which makes us realize how quickly life can change. They’re true, and since we’re talking about real people’s lives, never take life for granted and never drive and take a selfie. Here Are Top 10 People Who Died Taking Selfies Xenia Ignatyeva: She climbed a 28 foot railroad bridge to take a selfie and lost her balance. When she fell she grabbed onto high voltage wires and was electro

Around 1985, a community of people using what would come to be known as the Internet began documenting the stories of sensationally stupid deaths and sterilizations. With one less idiot to pass on their genes, the victims were said to be contributing to the long-term survival of our species. Thus, the Darwin Awards were born. The first official Darwin Award was granted in 1994 and the creators have continued to recognize the hundreds of contributions to human evolution ever s

Fighting Fear with Funny: Dying Boy Asks Comedian To Attend His Funeral Dressed As A...

"Comedian Russell Howard tells a hysterically funny, yet touching story about his friendship with Deryn, a young 14-year-old cancer patient, who asks him to attend his funeral. This story had me laughing and crying at the same time. You’ll want to watch right to the end – it’s the best part. Laughter truly is the best medicine!" PUTTING AN END TO ACTS OF RUDENESS ONE RUDE ACT AT A TIME Submit Evidence ~ School of Hard Knocks ~ Rank Pet Peeves ~ Shop #etiquetteed #comedy #fune
CONTRIBUTE GUEST POST